In my most recent monthly blog for the Society of Architectural Historians, I explored how the integrating the concept of “landscape” into the public interpretation of the UNESCO Sites of Japan’s Meiji Industrial Revolution (JMIR) could improve engagement with these historic places. By way of conclusion, I provided a number of practical suggestions for implementing this idea. One of these was the creation of a number of itineraries that would help potential visitors prioritize and choose the sites they visited. As I discovered, just trying to see all of the JMIR sites in one go was both exhausting and not particularly rewarding—some sites were simply more engaging or better developed. To break up the monotony of always writing, I decided to draw these ideas instead. I’ve struggled in my travels to find time for drawing and creative work, so this mini project is in part an excuse to use my sketchbook and rebuild some of the artistic skills that I’ve long neglected.

One of the things that was most interesting to me throughout my visits to the early sites of Japan’s industrialization were the ways in which existing Japanese technologies and crafts were recruited to new means—the construction of warships, or the forging of iron cannons, for example. We tend to think of “modernity” as being a harsh break with the past. After all, “modernity” only exists insofar as we understand there to be a “pre-modern period” that preceded it. What the sites included on this 9 day tour through Tokyo and the island of Kyushu show is that this is far from the truth. In fact, many precedents for Japan’s nineteenth-century industrialization were laid earlier in the Edo period. Although the Meiji Restoration was a revolutionary historic moment in many ways, there were many aspects of Japanese culture and society that persisted into the Meiji period and through the advent of more refined technologies of energy generation and mechanisms of production. I also wanted to acknowledge with this itinerary that not everyone who is interested in industrial heritage wants to spend several hours on a series of trains and buses to reach really out-of-the-way sites, or to risk getting lost. All of the sites included here are well developed for tourism and many of them are among the more “aesthetic” industrial heritage experiences one can have in Japan. The wildest part of the trip is a two night stay on Yakushima, the UNESCO-protected island off of Kyushu’s southern coast, which is home to a completely unique cedar and cypress forest that endured dramatic logging during the Edo period. But otherwise, all of the cities are served by the Shinkansen (bullet train) and are easily accessed via walking or public transportation. Beyond the JMIR sites themselves, I’ve integrated other municipal museums and attractions that enrich and supplement the overall historical narrative. 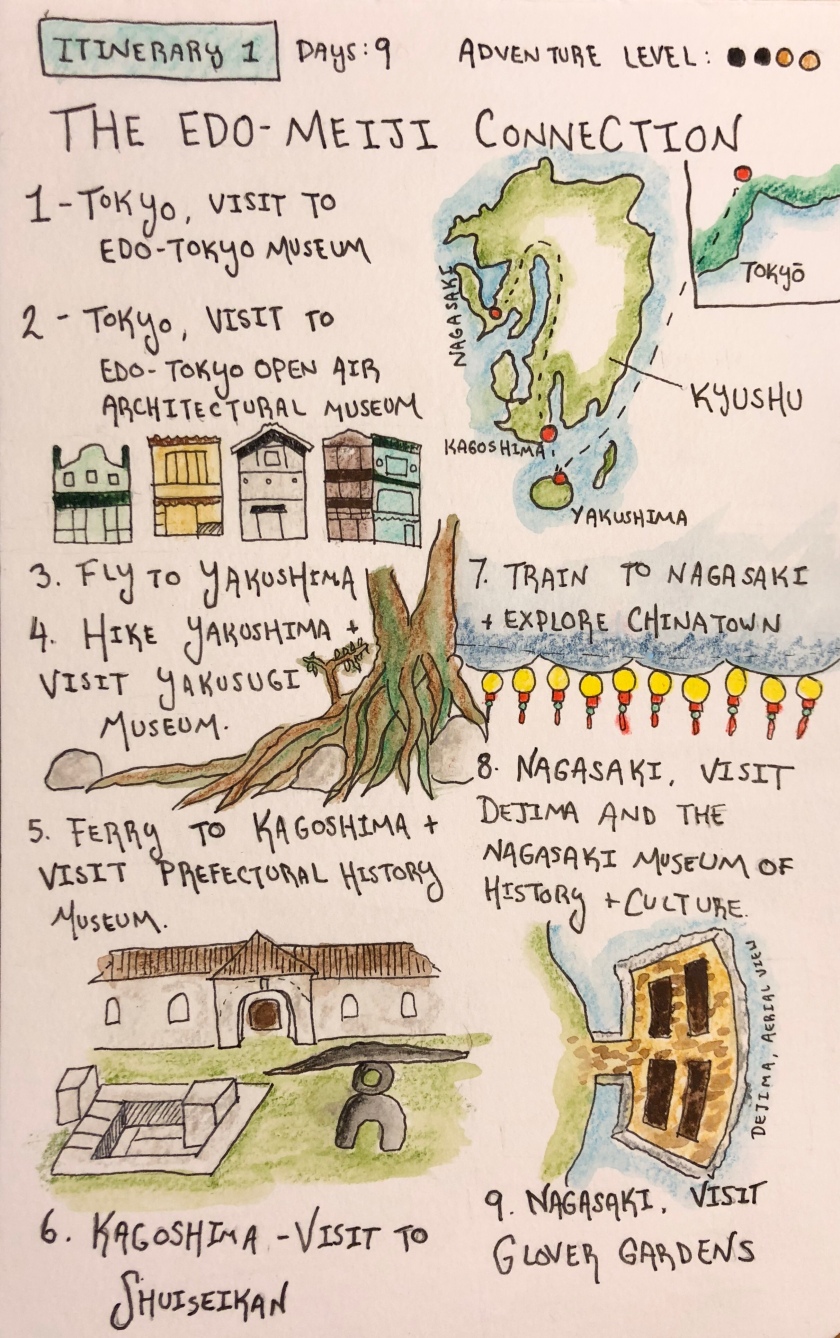